TheBrain is the ultimate digital memory.

Since the invention of the written word, humans have strived to capture thought and prevent it from disappearing into the fog of time. In 1945, Vannevar Bush imagined an external memory, writing in The Atlantic:

"[The human mind] operates by association. With one item in its grasp, it snaps instantly to the next that is suggested by the association of thoughts... Selection by association, rather than indexing, may yet be mechanized."

Digital tools are rapidly advancing toward the dream of never forgetting, yet our methods of organizing information remain distinctly linear… Until TheBrain, the first and only thought processor. Designed from the ground up to let you capture your ideas and information in a network of associations that match the way you think.

As We May Think

The real heart of the matter of selection, however, goes deeper than a lag in the adoption of mechanisms by libraries, or a lack of development of devices for their use. Our ineptitude in getting at the record is largely caused by the artificiality of systems of indexing. When data of any sort are placed in storage, they are filed alphabetically or numerically, and information is found (when it is) by tracing it down from subclass to subclass. It can be in only one place, unless duplicates are used; one has to have rules as to which path will locate it, and the rules are cumbersome. Having found one item, moreover, one has to emerge from the system and re-enter on a new path.

The human mind does not work that way. It operates by association. With one item in its grasp, it snaps instantly to the next that is suggested by the association of thoughts, in accordance with some intricate web of trails carried by the cells of the brain. It has other characteristics, of course; trails that are not frequently followed are prone to fade, items are not fully permanent, memory is transitory. Yet the speed of action, the intricacy of trails, the detail of mental pictures, is awe-inspiring beyond all else in nature.

Man cannot hope fully to duplicate this mental process artificially, but he certainly ought to be able to learn from it. In minor ways he may even improve, for his records have relative permanency. The first idea, however, to be drawn from the analogy concerns selection. Selection by association, rather than indexing, may yet be mechanized. One cannot hope thus to equal the speed and flexibility with which the mind follows an associative trail, but it should be possible to beat the mind decisively in regard to the permanence and clarity of the items resurrected from storage.

Consider a future device for individual use, which is a sort of mechanized private file and library. It needs a name, and, to coin one at random, "memex" will do. A memex is a device in which an individual stores all his books, records, and communications, and which is mechanized so that it may be consulted with exceeding speed and flexibility. It is an enlarged intimate supplement to his memory.

Read the original article in The Atlantic.

See and do more with digital thinking.

Where can you really go on your computer today to hash out a new idea, current event, or expand your plans in a meaningful way? TheBrain lets you digitize your mind so you can literally see your thinking and refine your ideas. Each of your Thoughts comes to life on-screen with connections to other related Thoughts, creating a context for thinking and action. 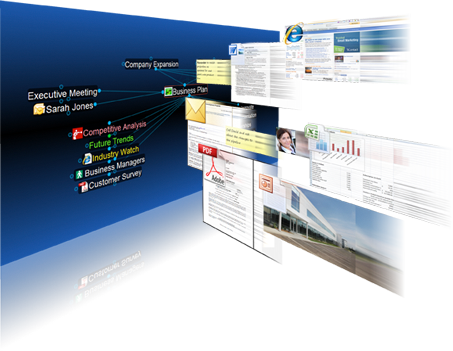 Integrate all your information in one place.

Your Brain can store an unlimited amount of all kinds of information. Write notes for all your ideas. Save files, web pages, images and even emails into TheBrain for instant access. Adding things is as simple as drag and drop. 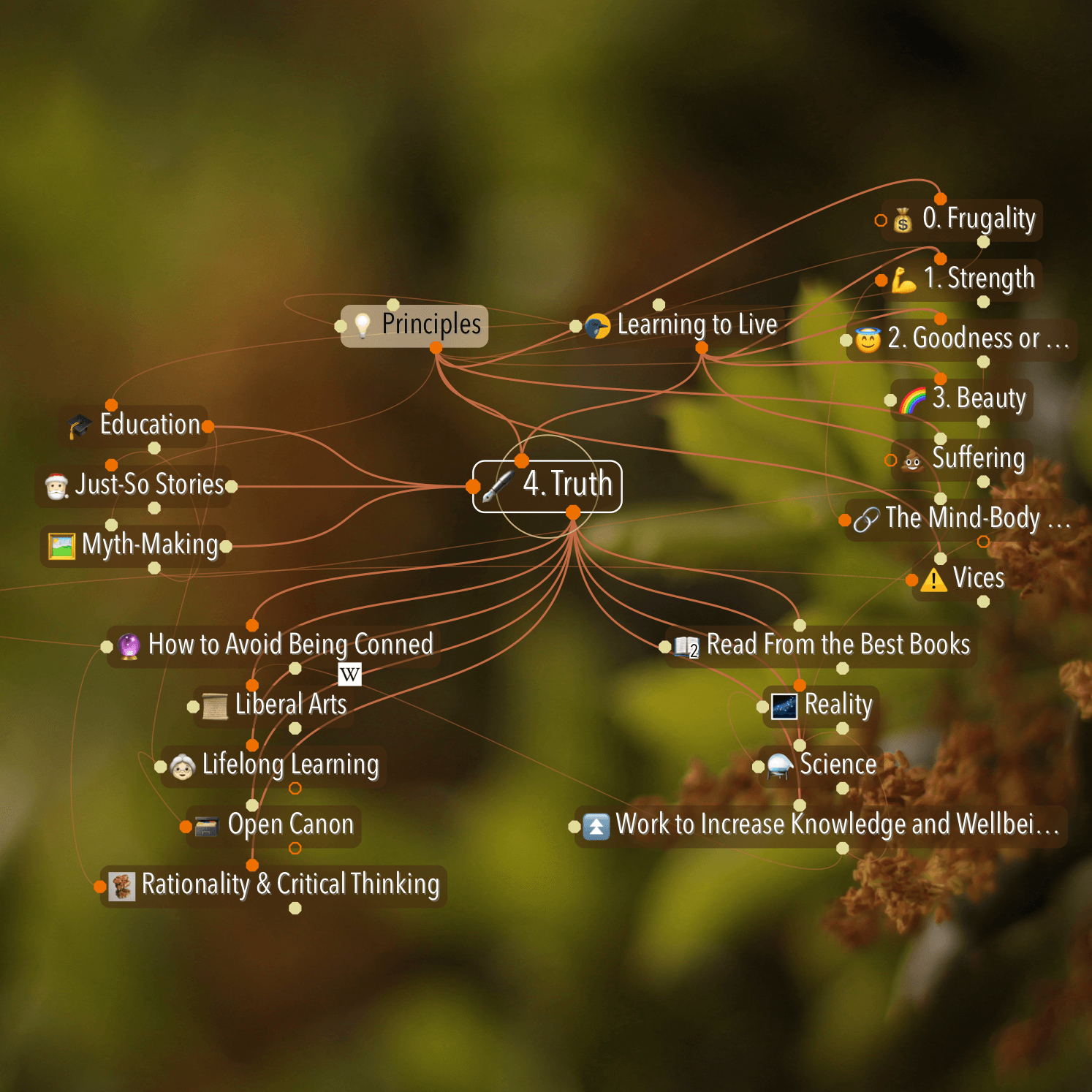 Your digital Brain works across multiple platforms and computers and can be synchronized across multiple machines. Access your Brain from TheBrain desktop software, a Web browser, or even your mobile device. Keep your data locally, plus a backup online for remote access and sharing with friends. 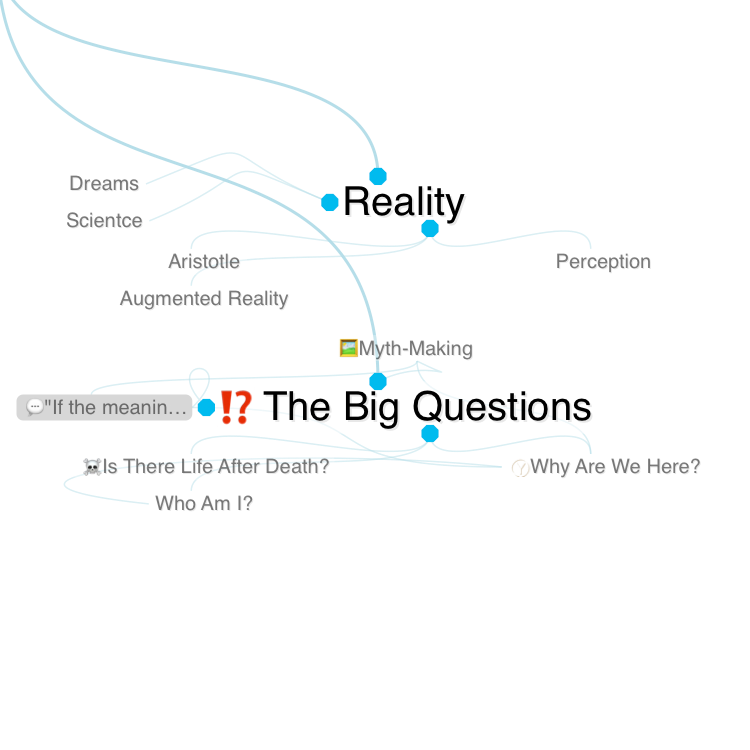 Activate any idea or file in seconds. TheBrain not only brings up the right idea but lets you see how it relates to everything else… so you are prepared for anything. This means you can shift contexts quickly and get an immediate visual briefing by viewing connected topics. 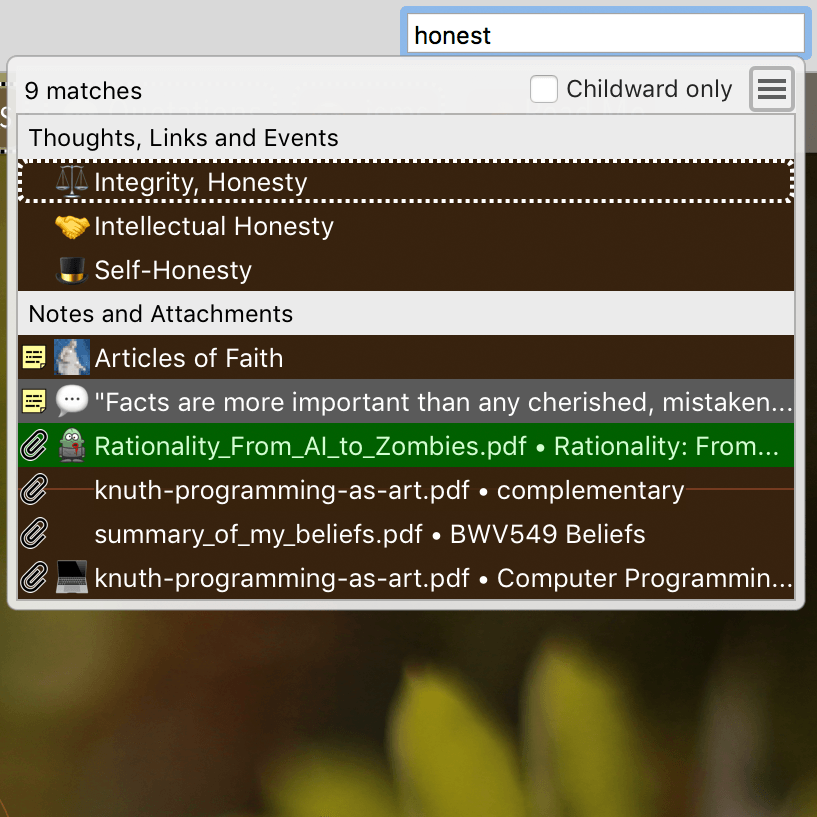 Move beyond linear file folder hierarchies and organize files the way you think - under multiple categories or projects. Anything can be linked to anything else. Track and save multiple versions, add notes and tag documents with priorities. Even integrate Outlook, Apple Mail, or webmail messages for a complete view of your projects. 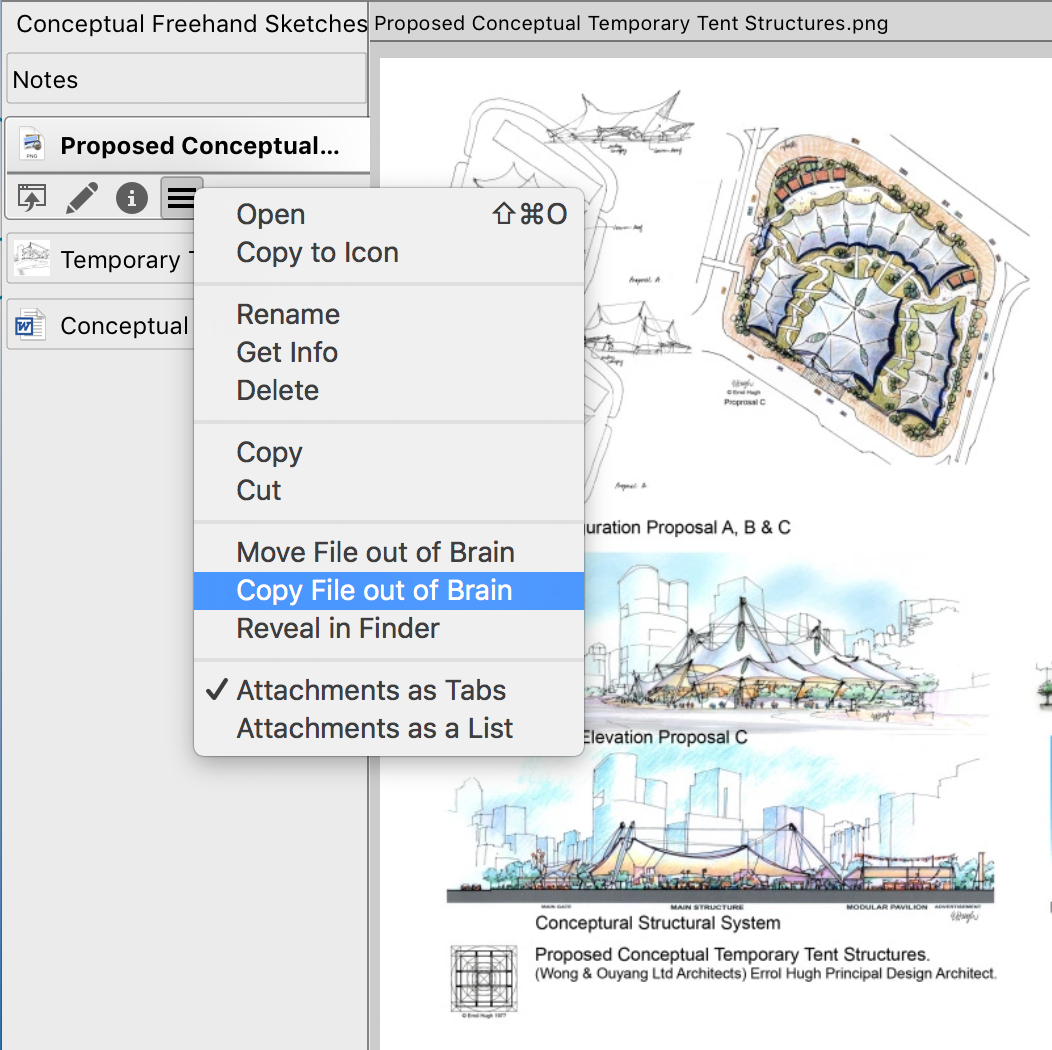 Get the big picture on your information.

TheBrain lets you see how your ideas and information are related. Use powerful visualization to discover information that would normally be overlooked, make connections and gain new understanding of your projects and content. 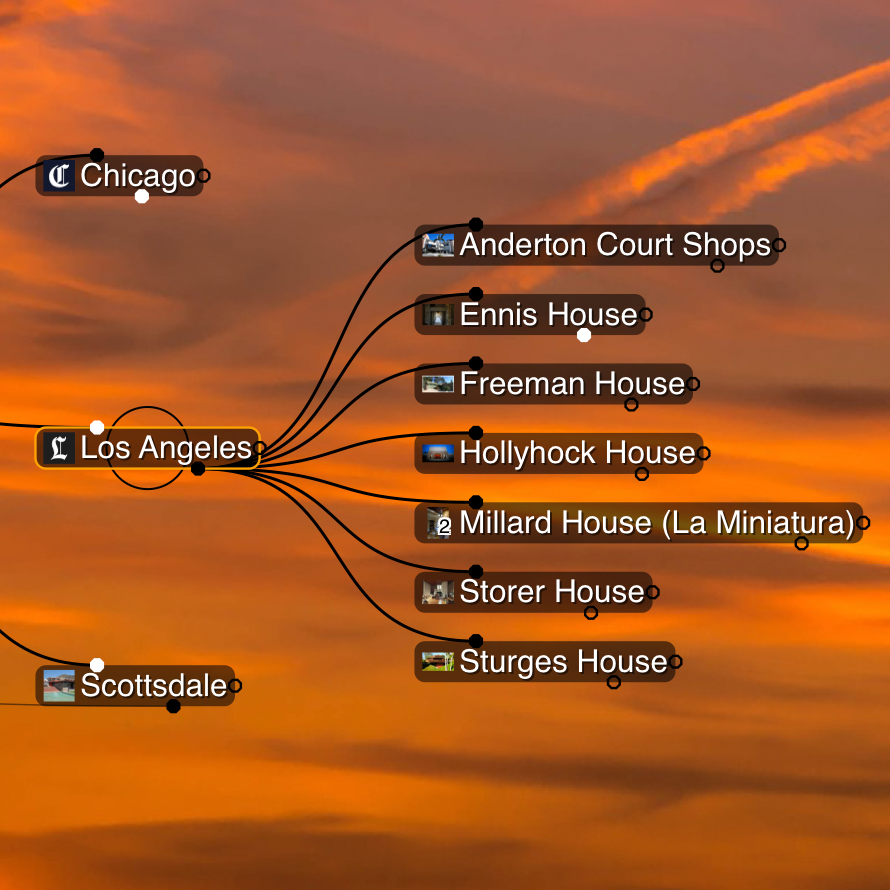 Build your network of connections, mimicking the way your mind works. Each link helps capture your thinking and provides a means of discovery.

TheBrain can easily accommodate 500,000+ items. Both the backend and the user interface have been carefully designed to scale.

Attach files and folders directly within TheBrain, including support for both internally saved and externally linked items.

Adding web links to your brain lets you connect all your digital resources together regardless of the source.

Add notes to any piece of information quickly and easily with hassle-free embedding of images, videos, links, and more.

Attachments, notes and more can be applied not just to thought nodes, but also to the connections between them enabling rich relationship details.

Native on Every Platform

TheBrain is a true native application on Windows, macOS, iOS and Android, optimized for the OS-specific features of each platform.

Search the content of every thought in your brain, including notes and file attachments, in seconds. Just start typing.

Go beyond search. TheBrain's visual context helps find things you didn't know you had by following the associations you've built into your brain.

Content-focussed design gets out of the way so you can focus on your stuff.

Work online or offline and sync everything including attachments across all your devices. Plus backup to the cloud and access from the web.

Don't like the cloud? No problem. You can keep all your data completely local to your desktop.

Export 100% of your data to JSON files at the click of a button.

Add TeamBrain services and work with your team even when offline. TheBrain syncs up whenever a connection is available.

Images, PDFs, web pages and more load automatically for instant viewing and one click opens your attachment in its native application.

Attach events and reminders to thoughts in your Brain so you have the information you need when you need it.

TheBrain’s innovative timeline view smoothly scales to show you your day, week, month, or even year at a glance.

Create your own custom tags including colors and icons then use them for fast access, instant recognition, and for custom reports.

Thought and link types allow you to create ontologies including inheritance of properties for more consistent relationship mapping.

See any section of your brain as an interactive outline with the ability to expand multiple levels parentward and childward.

Mind map view is perfect when you want to focus on one area of your brain. Re-orient the mind map at any time.

Zoomable icons are automatically created from web pages and images. Plus you can add any image or choose from over 2,000 built-in icons.

Create reports using tags, types, attachments and more, then filter and order them according to your needs.

Changes are automatically logged so you can review the individual history of each item in your Brain.

Themes and extensive preferences let you adjust the application to suit your visual style and your habits.

TheBrain’s web client lets you share your cloud-synced Brain with anyone via the browser without the need to install any software. 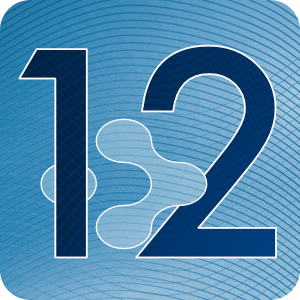 TheBrain 12 makes connecting information virtually effortless. With discovery of related content, automatic display of backlinks and a redesigned content area, your ideas and knowledge will come to life like never before. Users worldwide are hailing this as the most exciting upgrade of TheBrain ever.